This latest version of Lasernet brings with it some major new developments that we believe will help customers start enjoying some of the great new features and improvements we have added over the years, as well as helping Lasernet to reach its full potential. Alongside this, we have also looked at ways of making Lasernet even more secure and user-friendly.

Four mandatory services with two additional services to run the Windows Server with Local System as the default user have now been renamed, as follows:

The primary Lasernet service to process workflows and forms installed and licensed via the License Manager by the end-user (similar to previous versions).

A new service to manage all the Lasernet configurations.

A new service that provides a web interface for managing Lasernet configurations and servers.

Only required for users running Lasernet Input Management with dictionary support. Installed via the Lasernet License Manager by the end-user (similar to previous versions).

Allows multiple Meta instances to run on the same machine. Installed via the Lasernet Meta 9 installer by the end-user (similar to previous versions).

We have introduced a new launcher with access to all the Lasernet applications and manuals.

Log into the Lasernet configuration server as a Lasernet and/or Admin user with a secure connection.

Here you can create, import and open a configuration.

We have updated the user-interface with a new skin, frameless editors, improved usability, new modules and new deployment and administrative tools.

Along with a new Lasernet Developer theme, new deployment tools are now available on the ribbon.

You can now set Master Jobinfosa in the configuration for each server using the Server JobInfos button.

The status for changed objects can be shown.

A new Tools panel has been added with four new options: Search, Subforms, Phrases and Resources:

Search: users are able to search for text strings in objects and resources.

Subforms: Subforms can be accessed in EMF. 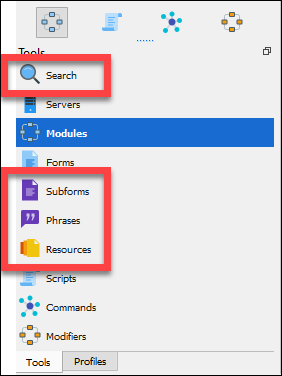 Users can now commit or add new objects to the Lasernet Configuration Server or revert changes previously added to the configuration. Changes made can be seen in the Show Changes window once you have clicked the  Show Changes button: 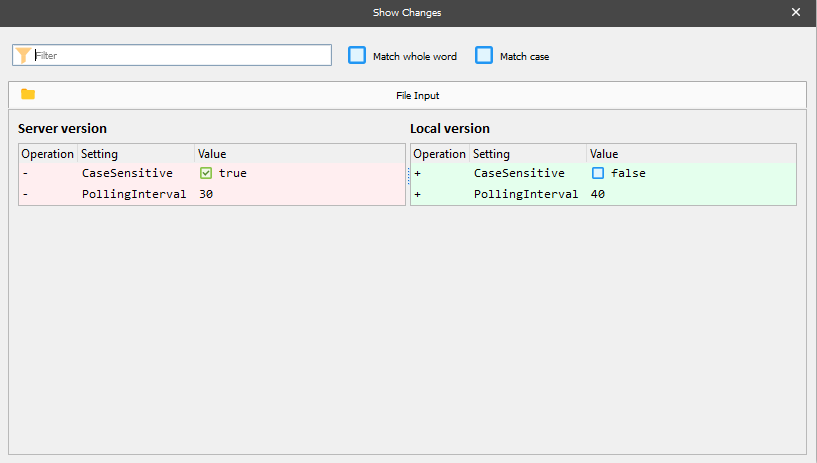 The Show Changes window, displaying the changed properties for a range of supported object types

Before committing any changes, you can log messages which give more details of the change within a message field. A Revert button enables users to revert changes to the local server version.

View a history log, committed objects with date/user details for all revisions of the configuration. 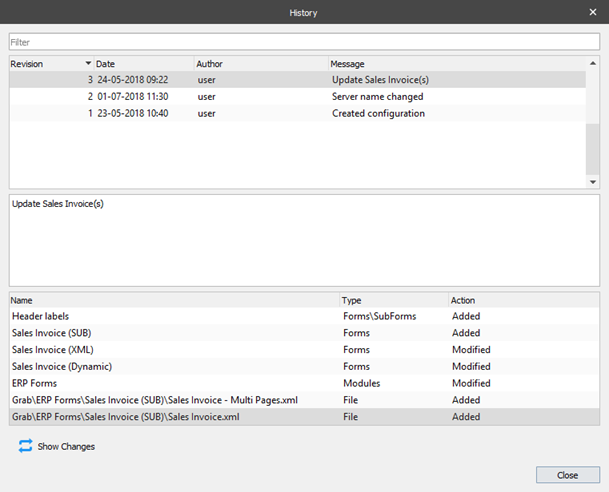 Patch server works in a similar way to the Lasernet Update tool found in previous versions of Lasernet and only available from Lasernet Developer, using the Patch button.

Create your own customized modules with inline Modifiers, Scripts, XML Transformer Forms, Database Connections and Commands and their settings. You can now view inline objects with criteria as pseudo code and select a custom icon for a module.

Toggle between showing all objects and only checked objects. Export/Import configuration objects as a single file (.lnconfigx).

There is a new server feature to set environment JobInfos on the server level: 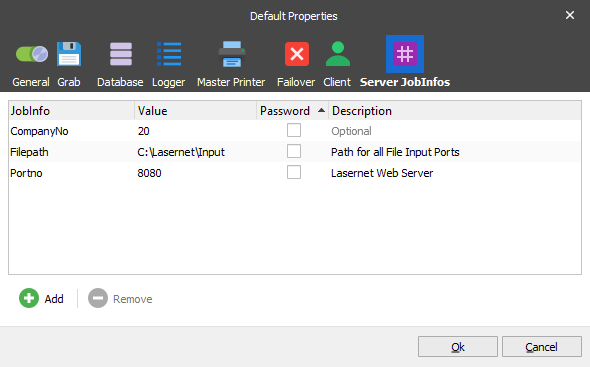 There is now a new toolbar with editing tools: 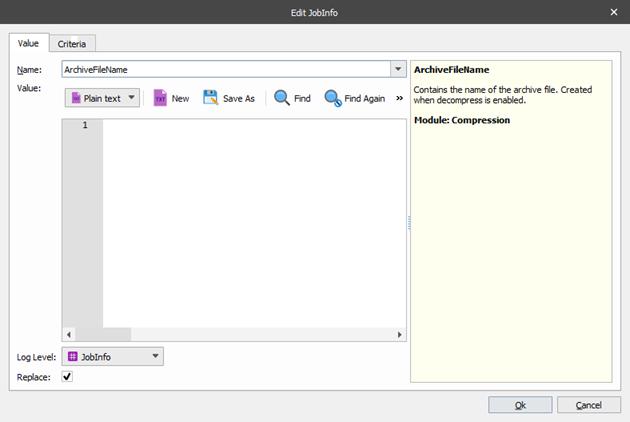 The following content summarises the new modules and minor changes/improvements that have been made:

The PDF Converter's speed is now up to three times faster.

There is now a new module to combine/merge PDF documents. 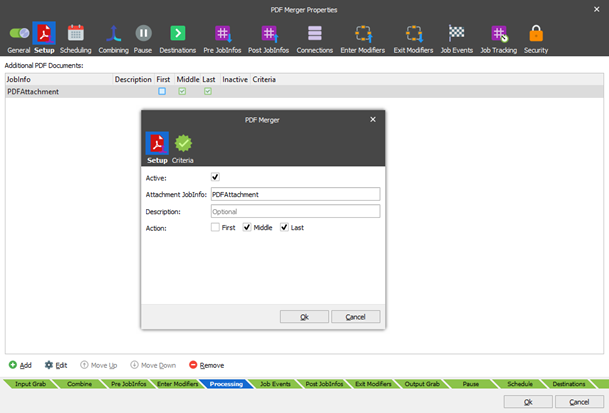 There is now support for running modules as modifiers.

Support for CSV to JSON and JSON to CSV.

Support for parsing JSON RESTful when setting up web services in the Web Server module.

Build-in auto print tools for DOCX, PDF and XSLX formats created by Lasernet. No need for third-party party components, but they are still supported.

Magic bytes support to auto-detect job format for background printing of DOCX, PDF and XSLX documents. No need for additional JobInfos to detect a print job. 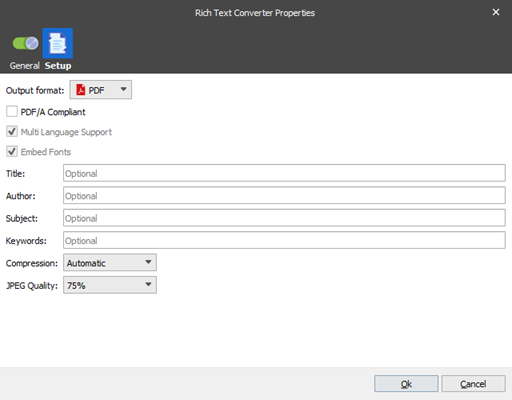 We have updated skin with frameless editors and dialogs. Forms without criteria are no longer processed and at least one criterion in a form is mandatory.

A new Rich Text Editor with mail merge support and DOCX, PDF, PDF/A as output formats is introduced; with a built-in Phrase Editor to create and inherit multiple inline or global phrases across forms created as DOCX/PDF format. 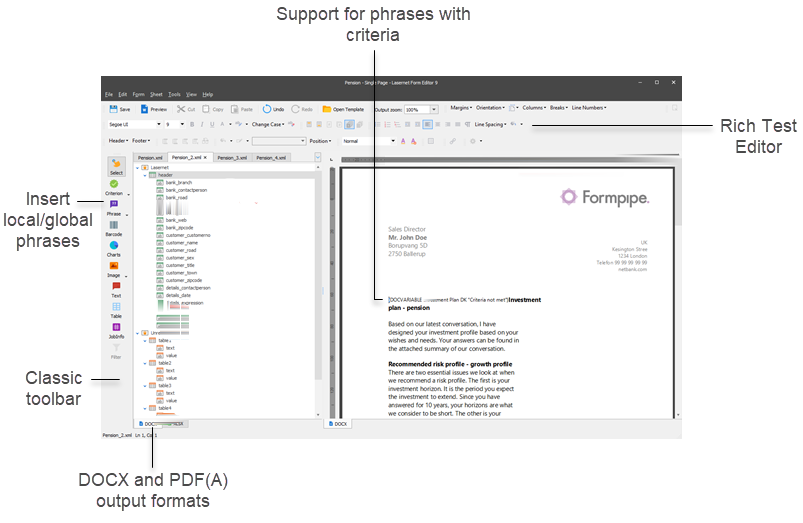 Alternate rows - odd/even colors in the body of tables

Customize the background colours for odd/even lines in the body of tables. Define the user rules for background colors for the top and bottom of margin and the additional progress based on output results for first/last odd/even colors.

You can detect alternating rows within Pattern Properties, and set odd/even colours in the body of all tables.

Form indexes for Form Engines and XML Transformer Engines are replaced with a new setting named 'Setting'. Forms with the lowest value have the highest priority.

The server name and port number are maintained from the Lasernet Config Server. In Lasernet Developer 9 configuration, you only have to add the name of the Instance.

Support for locks and synchronization of committed objects in multi-developer mode.

Activate View->Preview to show/edit preview for Resource objects and Phrases. 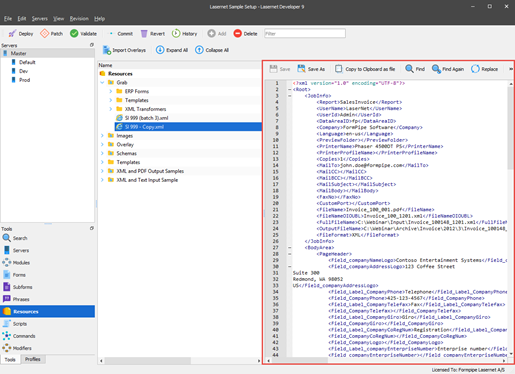 SQL Server is used as a backend for the Lasernet Configuration Service.

2 of 2 people found this page helpful