This document describes the enhancements in LAC365FO version 6.14.0.

Lasernet version 6.14.0 contains all the models including the model for the integration with D365CE and the models for Lasernet print buttons.

It is possible to install/deploy this package separately and the package will get updated once new hotfixes are introduced for the standard D365FO.

Both the package and the release notes for LACMSHotfixes are accessible as separate downloads.

The new model LasernetPU35Spec is added for supporting the Wave labels in standard D365FO.

The model LasernetPU35Spec is only added to the PU34+ package and it’s possible to download and install a separate package containing this model.

The version number should contain version 6.14.0 such as the following after either installing or deploying the AOT package:

The primary focus in LAC365FO version 6.14.0 is stability and usability.

Using previous versions of LAC365FO would cause issue(s) with PU43 (10.0.19) as the Lasernet destination wasn’t shown for all reports – both an issue with the printer settings dialog and the Lasernet print buttons.

The Lasernet connector (LAC365FO) is using the “call-stack” in std. Dynamics 365FO to identify if Lasernet should be available as the destination.

This call-stack is changed in standard Dynamics 365FO PU43/10.0.19 and therefore also requires changes in LAC365FO (and PRN as well).

The feature Auto detect patterns within Lasernet > Setup > Parameters are added to support any versions of Dynamics D365FO. – Basically to ensure LAC365FO are both backward and forward compatible.

Please use the Auto detect patterns in case the Lasernet destinations aren’t shown as expected.

It will automatically get initialized when running a report for the first time, but requires a “re-initialization” by using the Auto detect patterns when upgrading to Dynamics 365 for Finance & Operations PU43 or newer.

Information about the detection of Lasernet as a destination is saved within the fields Stack form pattern and Stack class pattern.

Please remember to use the Auto detect patterns for each of the Companies/Legal entities within Dynamics 365 for Finance & Operations in case Lasernet is missing as a destination or in case of an upgrade to D365FO PU43 or newer. 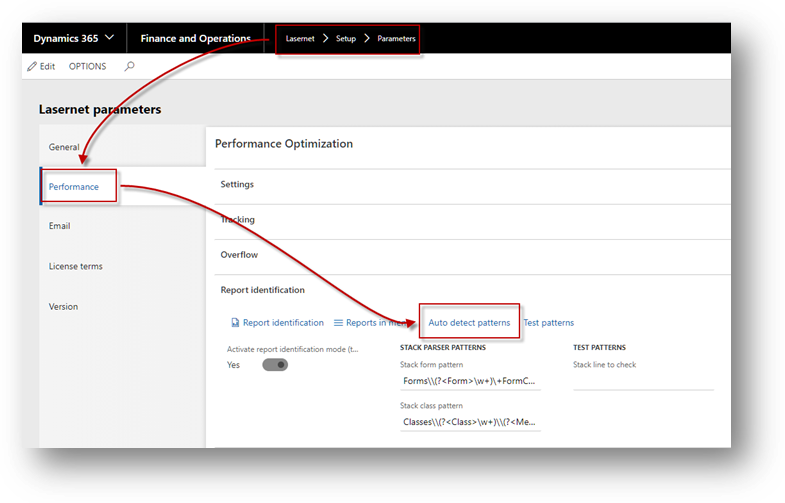 The Stack form pattern and Stack class pattern are made visible to provide an option for a work-around in case Microsoft makes additional changes to the “call-stack” in future versions of Dynamics 365 for Finance & Operations.

Previous versions of LAC365FO did save a copy (packed version) of the Query which was created within the Query Wizard.

This could cause issue(s) when adjusting the structure within the Query Wizard as this could change the Unique IDs which are used for the ranges within the Form-links.

A new approach has been implemented in LAC365FO version 6.14 which is re-using the same Query as the one created within the Query Wizard and only applies the ranges and the sorting when used in the Form-links.

Please delete the “last-values” in case a report isn’t working as expected.

Example of the issue in previous versions 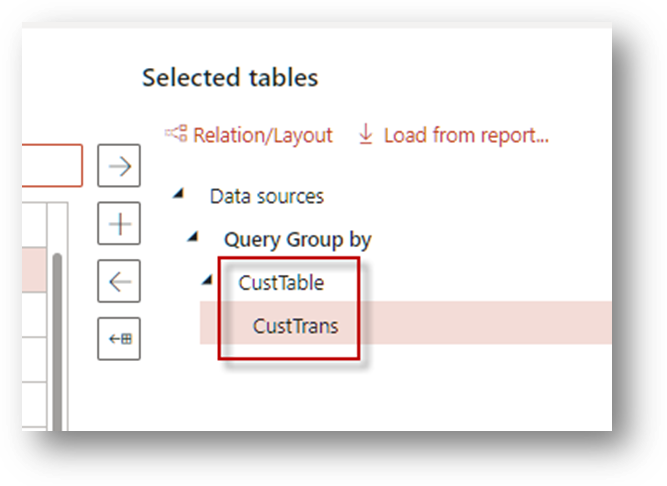 Use the field CustTable.AccountNum to link a Form with the Query – like the following:

It's possible to use Form instead of Context in the following expression. 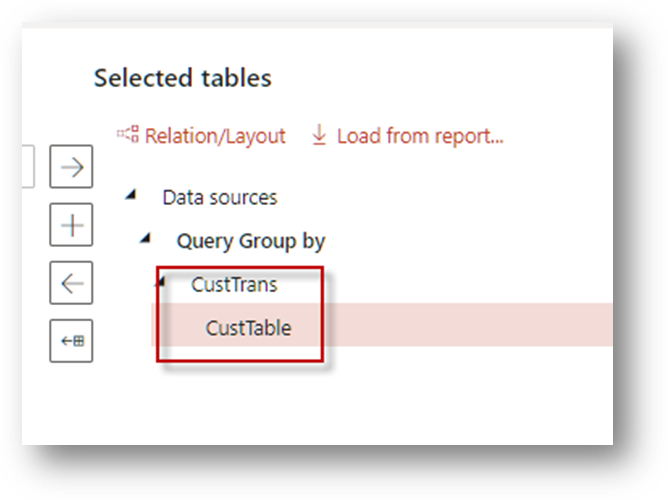 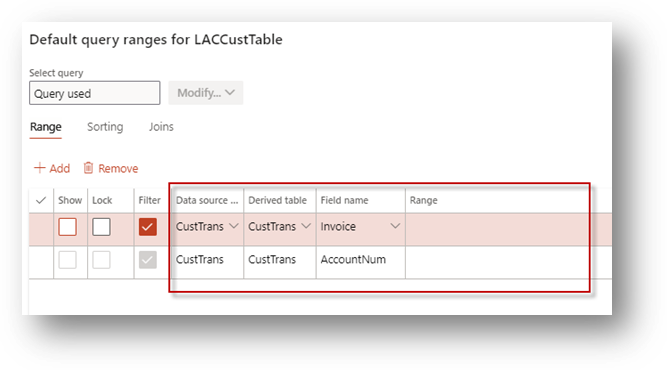 LAC365FO version 6.14.0 will keep the range(s) – like the range CustTable.AccountNum in the following: 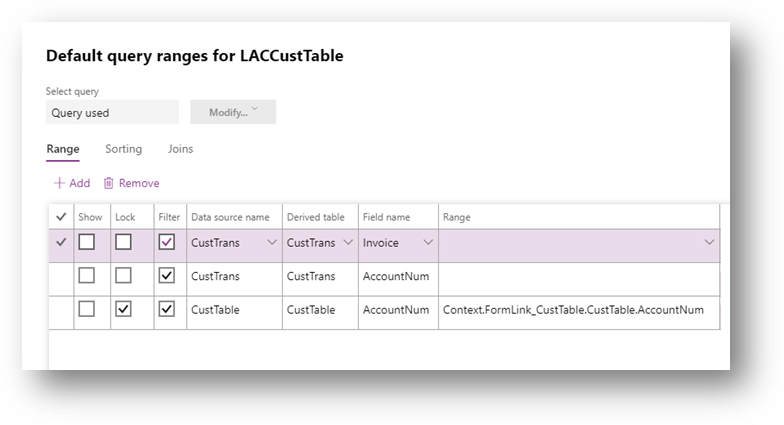 A new option for adding images such as company logos is added into LAC365FO version 6.14.0.

The general location for adding images which afterward can get used at Report-level and/or in the Report group(s). 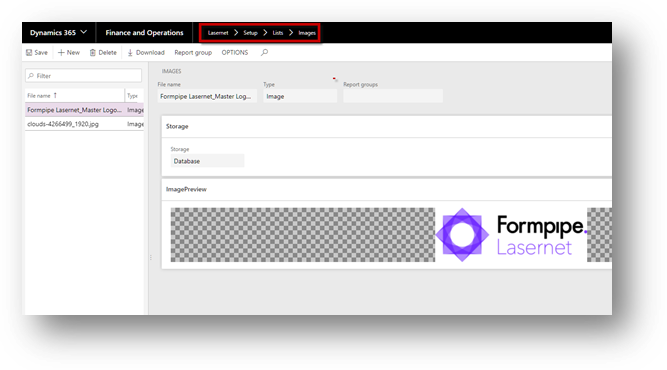 Images are added specifically for the report.

It creates a report group containing a range for the specific report (Dynamic Range for the report) and the added image(s). 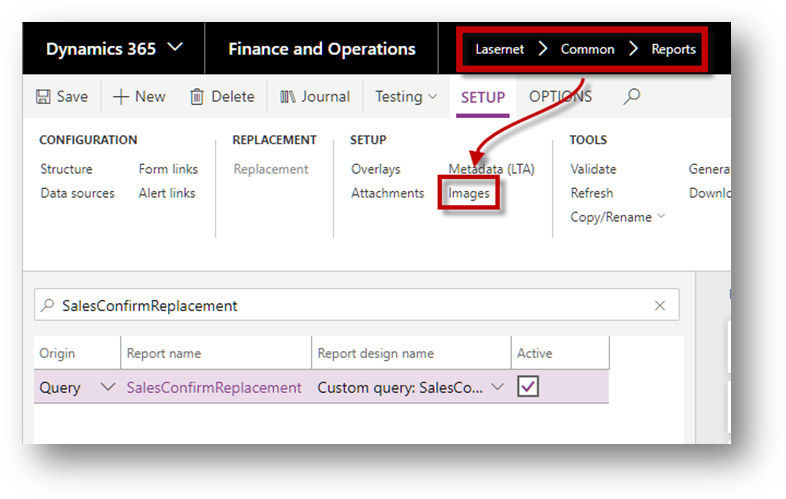 Provides the option to add images across a number of reports

Images are added (binary encoded) into the XML file such as the following:

They can get used in Lasernet by using Image > Job > Base64. 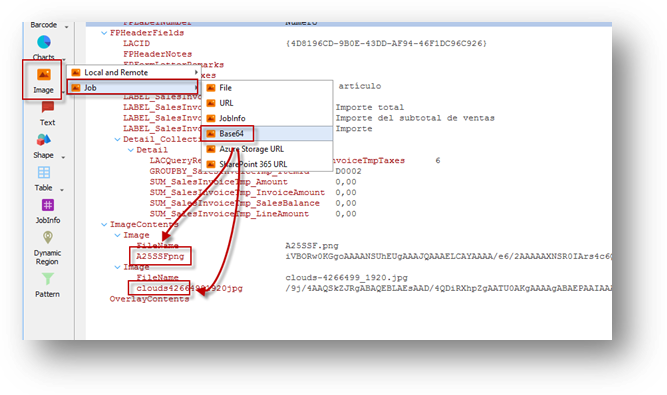 A version of the Query is no longer saved within the Form links.

A warning such as the following is displayed in LAC365FO version 6.14.0 when entering a non-existing value for an Enum:

Note: It was possible in previous versions of LAC365FO to enter a non-existing value for the Enum. 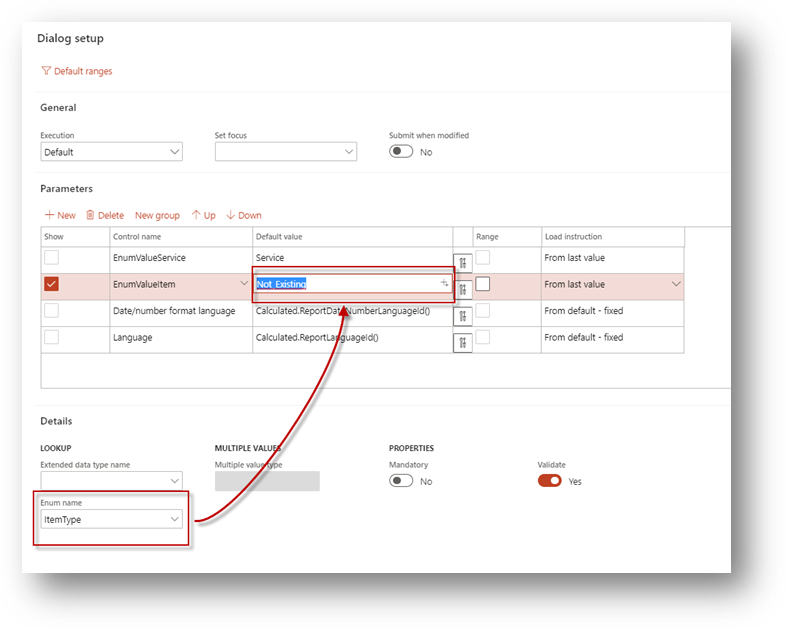 LAC365FO version 6.14.0 will display a warning similar to the following when entering a non-existing value for an Enum: 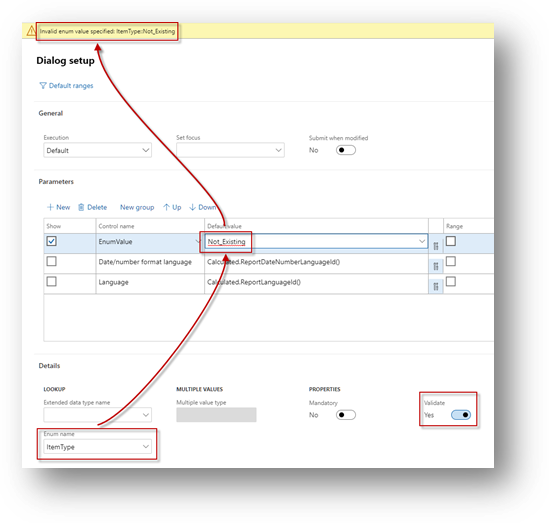 The value for the Enum isn’t validated when Range is selected or if Validate is disabled.

No validation of the Enum-value when Range is marked

No validation of the Enum-value when Validate is disabled 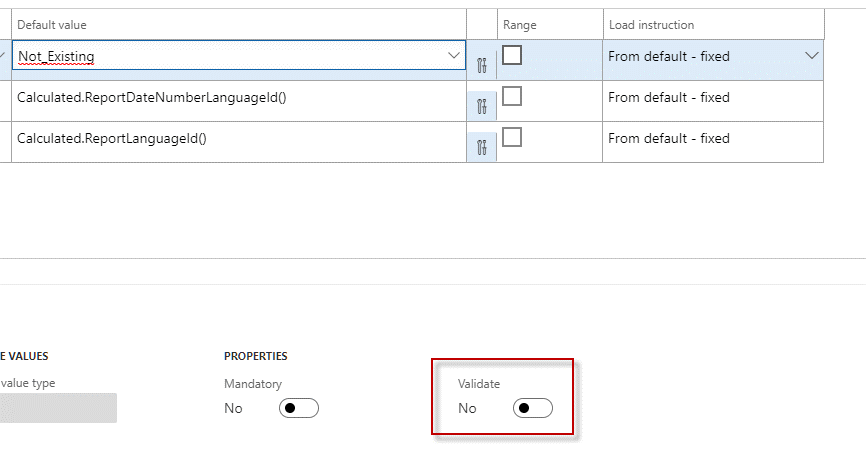 In previous versions of LAC365FO, it was not possible to execute an OData report within a batch task.

Executing an OData-Query (CE) within a batch task would throw the following error:

'Batch task failed: Object reference not set to an instance of an object.'

Making a lookup of OData fields didn’t work as expected when the field property was different from the field name - such as having a field-entity accountId for the entity quotes.

220971@LAC365FO – Adding custom(yellow) OData field is not initializing right data type, as fields are taken only from selected fields in the wizard

The Type/Datatype when adding an element manually for an OData-Query wasn’t set to the proper type, such as in the following in which the Type/Datatype should become a Real.

Only an issue when using an OData-Query and work-around was manually adjusting the Type/Datatype.

Previous versions of LAC365FO did only support lookup for 99 subsites when using Sharepoint within the connection for a server.

A new option for adding images like the company logo is added into LAC365FO version 6.14.0.

It’s possible to add the pictures/images at the following locations:

Activating the following preview feature could cause issues when saving the record at a Form.

It could also cause issues when trying to add a condition to the Form.

The Work-around was disabling the following preview feature in std. Dynamics 365 for Finance & Operations.

Warnings such as the following could get thrown in Form Lasernet servers when trying to create/save the record: 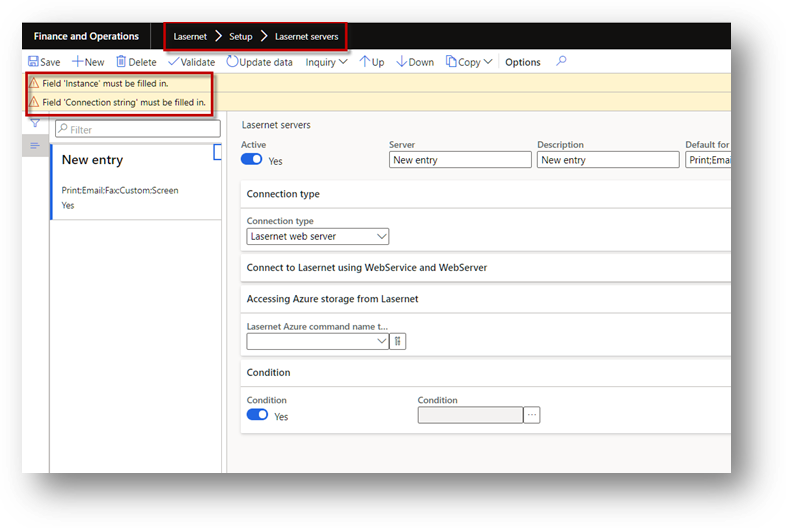 'Field 'Instance' must be filled in.'

'Field 'Connection string' must be filled in.'

The following warnings could get thrown when adding a condition: 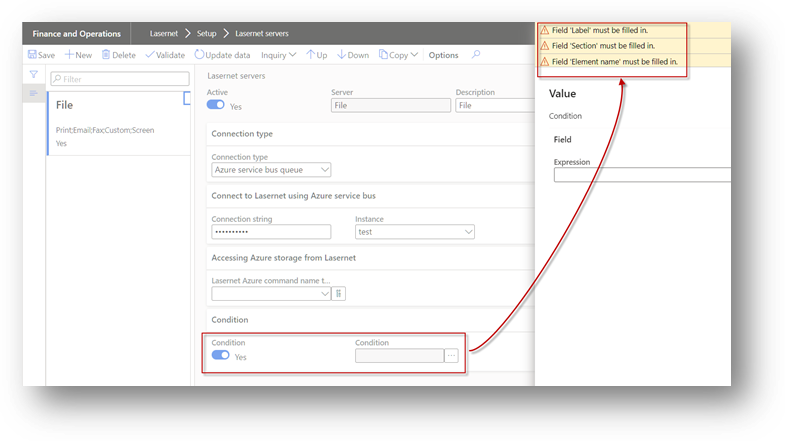 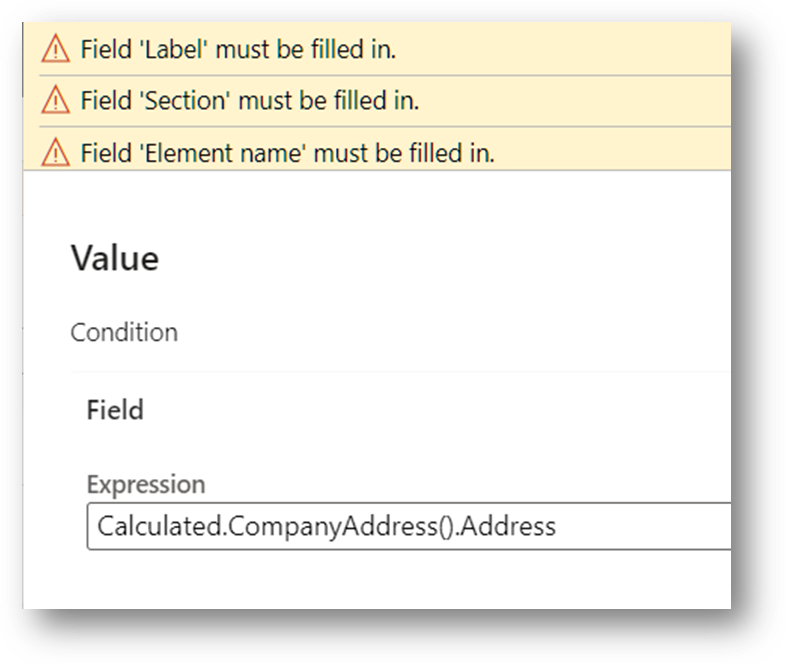 'Field 'Label' must be filled in.'

'Field 'Section' must be filled in.'

'Field 'Report' must be filled in.'

A reference to the model Retail is required for the model Lasernet when using Dynamics for Finance & Operations PU43 / 10.0.19.

Validating a report of type Class (OData/CE) could throw an object reference error. Refreshing the meta-data could avoid this error. 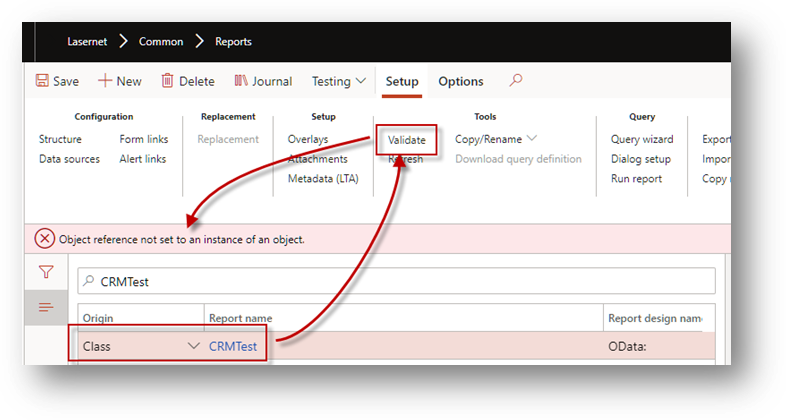 'Object reference not set to an instance of an object.' 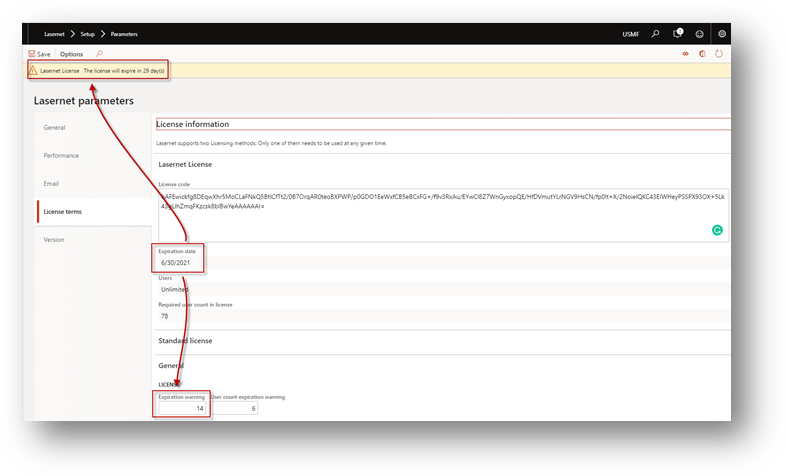 An empty screen was shown after delivering a document for which a signature was added within the review of the document.

This is fixed in LAC365FO version 6.14.0 and no empty screen is shown after delivering a document containing a signature.